Ants are among the most prevalent pests in households. They can invade restaurants, hospitals, offices, warehouses, and other buildings where they can find food and water.

Many ants enter homes from outside nests as they forage for food.

Knowing what species of ant is present helps to determine the nesting site, food preference, and the best method of management. In most cases, the most effective, permanent solution is to find and treat the nest; queens must be killed to properly eliminate a colony.

Baiting is one of the most effective ways of eliminating ants. Workers feed on the bait and take it back to the nest where they share it with the rest of the colony. An advantage of baits is that they are delivered into inaccessible areas that insecticide sprays cannot reach, and will have a better chance of killing the queen. However, it is important to be patient; baits can act slowly and may take several weeks to eradicate a colony. Ants will not be equally attracted to all baits. It is important to identify what ant species is present so the appropriate bait can be used.

Ant management requires diligent efforts and the combined use of mechanical, cultural, sanitation, and chemical control methods. It is unrealistic and impractical to attempt to totally eliminate ants from an outdoor area. We focus management efforts on excluding ants from buildings or valuable plants and eliminating their food and water sources. Reducing outdoor sources of ants near buildings will reduce the likelihood of ants coming indoors.

Shakespeare Pest Control has the most effective baits and equipment to eliminate your ant problems.

The German cockroach is best identified by its small size and by two dark parallel lines running from the back of the head to the wings. It is usually found in kitchens (near dishwashers, stoves, and sinks) and in bathrooms of homes.

German cockroaches usually prefer a moist environment with a relatively high degree of warmth. The insects are mostly scavengers and will feed on a wide variety of foods. They are most active at night, but can still be seen during the day.

Sanitation is by far the most important component of any pest control effort!  German cockroaches require 3 things to thrive-food, water, and harborage. If you can eliminate even one of these things through proper sanitation, the cockroach population will be forced to either die or move some place else.

Next to sanitation, the next most important and essential component for German cockroaches is baiting.  By using gel bait placements in areas of highest travel, German cockroach infestations can be eliminated completely within weeks.

Even if baits, chemicals, and sanitation work to successfully kill off the present adult roach population, there will still exist egg sacs that hatch within 1 to 2 months after that last adult roach is sighted. That is why our program must include an IGR, or Insect Growth Regulator.

All 3 methods work together to eliminate German cockroaches. The cleaner the house the more attractive the bait becomes by making it the only food available and once the cockroaches are killed the IGR prevent further reinfestations. There are many other effective means to eliminating German cockroaches. We will find the method that works best for you.

Shakespeare Pest Control has eliminated some of the worst infestations in Southern Utah. If you are suffering from German cockroaches give us a call for a free estimate.

There are about 9 species of scorpions in Utah; only one, the Arizona bark scorpion, can cause fatalities in small children, and older adults with compromised health. Stings from any scorpion can be painful and show signs of localized effects like bee stings. If you are stung, have the scorpion identified to help doctors with their diagnosis.

Scorpions are nocturnal. They find shelter during the day and come out at night to feed.

Outside, they can be found burrowing into sand boxes, ditches, and gravel pits. Scorpions are very difficult to control outside. To minimize scorpions from around a home, eliminate favorable habitat. Do not keep shoes, boots, clothing items, or wet towels outside. Clean up any debris around the house, and only bring firewood inside when it is immediately going to be burned.

Black Widows are by far the most worrisome spider we have in Southern Utah.

The black widow is a species of spider that is known for the females’ unique appearance and venomous bite. It has a shiny black body with red markings, and its venom is reported to be 15 times stronger than a rattlesnake’s.

The black widow gets its name from its bloody courtship ritual. After mating, the female often kills and eats the male, explaining the males’ short lifespan.

Black widows are highly poisonous; fortunately, they bite humans only when disturbed. Contrary to popular belief, most victims do not suffer serious damage. The black widow bite can occasionally be fatal, however, with small children, the elderly, or the physically infirm at the highest risk. If bitten, one should seek emergency medical attention immediately.

Wolf spiders are often confused with the brown recluse, but they lack the unmistakable violin-shaped marking behind the head. They are common household pests in the fall when they are looking for a warm place to stay during winter. They are commonly found around doors, windows, house plants, basements, garages, and in almost all terrestrial habitats. They do not spin a web but roam at night to hunt for food. The wolf spider is shy and seeks to run away when disturbed.

The genus Hogna Giant wolf spiders (1.5″-2″ diameter) are commonly encountered in fall in Utah. Like other wolf spiders, they are not of medical concern, even though they do bite.

Camel spiders are common in southern Utah. These fast (up to 10 mph), nocturnal hunters do not have venom glands so they pose no serious threat to humans, however can give a painful bite. In Utah the common size is about 1.5 – 2 inches. 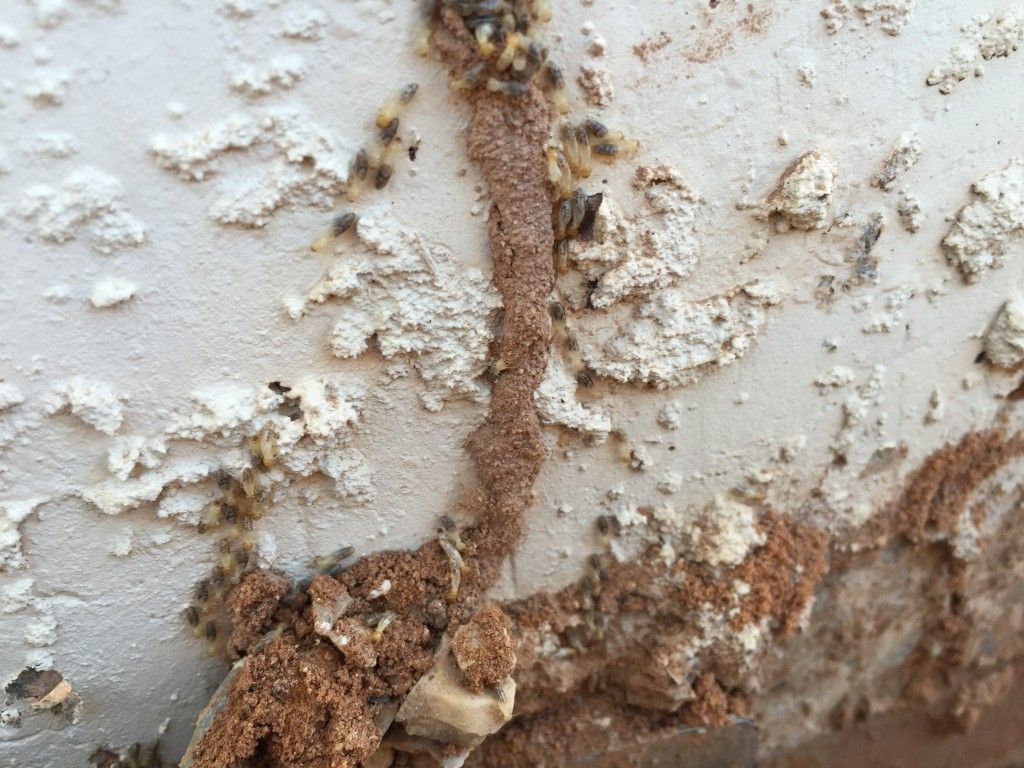 Southern Utah is considered a moderate climate for termites. The climates in Utah that are more hot and humid have more termites than the cooler climates.

While termites are not as much of a concern in St George, Southern Utah, they are still fairly common.Termites are considered the most destructive insects in the world because of the damage caused to wooden structures. There are two types of termites we deal with here: Subterranean termites and Drywood termites.

Subterranean termites build distinctive tunnels, often referred to as “mud tubes”, to reach food sources and protect themselves. Like other termite species, subterranean termites also feed on products containing cellulose, so it is not uncommon to have them eat the paper on sheetrock and cardboard boxes left in the same spot for too long. Subterranean termites swarm in the spring to start new colonies. Termite swarmers have wings and often get confused with ants.

Drywood termites are most often discovered  because they produce dry fecal pellets called frass and push it out through “kick holes”.  The frass will make sawdust-like piles on the ground or around window frames.

Drywood termites spend their entire lives inside wood and the wood provides all the moisture they needed to survive.

Eliminate or reduce moisture in and around the home, which termites need to thrive.
Repair leaking faucets, water pipes, and exterior AC units.
Repair fascia, soffits and rotted roof shingles.
Make sure water runs away from the home with properly functioning downspouts and gutters.
Monitor all exterior areas of wood, including windows, door frames and skirting boards for any noticeable changes.
Maintain at least a 1 inch gap between soil and any wood portions of your home.
Try and keep firewood stored at least 20 feet away from the house.

Bed bugs are very resilient. Nymph (baby Bed bug) and adult Bed bugs can persist months without feeding which is unusual for most insects.

It often seems that Bed bugs arise from nowhere. The bugs are efficient hitchhikers and are usually transported into dwellings on luggage, clothing, beds, furniture, and other items. This is a particular risk for hotels and apartments, where turnover of occupants is constant. Bed bugs also can be carried in on one’s clothing, shoes or wheelchair. Once bed bugs are introduced, they can crawl from room to room or floor to floor. They can also be transported throughout buildings on people and their belongings.

Unlike cockroaches and flies that feed on filth, there is often no relationship between Bed bugs and cleanliness. Since the bugs feed solely on blood, pristine dwellings can be as vulnerable as any other.

Ready to live without bugs?

Give us a call today to come treat your location.